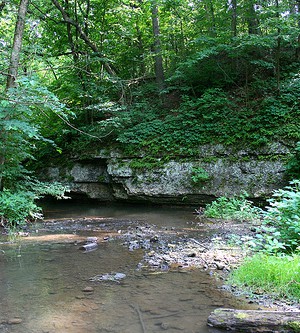 Located in the heart of the Rock River valley, this charming 385-acre park is the south boundary of the old Chicago-Iowa Trail. History tells us that this was for years the principal route east and west across the northern part of the state.

Today the park provides the perfect recipe for family getaways. There are plenty of outdoor recreation activities, such as hiking, fishing, camping and picnicking. With lots of serene, picturesque beauty, and modern lodge facilities amidst a beautiful forest, there is no better way to retreat from the everyday routine than to re-discover yourself and your family among the open spaces at White Pines.

Small mammals, including squirrels, raccoons and chipmunks, thrive in the luxuriant undergrowth, and the spreading branches above are filled with pine thrush, warblers and, in winter, flocks of migratory northern birds.

Among the park’s most interesting features are the concrete fords that span the creeks, allowing the visitor, quite literally, to drive through the flowing streams. Also, a newly added benefit for those physically challenged are four concrete sidewalks leading up to the stream bank for viewing or angling.

White Pines Forest lies in the heart of Black Hawk Indian country and is rich in historic accounts of the warriors who resisted the efforts of settlers to drive them from the beloved Rock River valley. Eventually, however, the Black Hawk War forced them out and Warrior Black Hawk himself was sent into exile in the custody of his rival, Keokuk.

When early settlers arrived, they found this 700-acre forest of untouched pine extending for 1/4 mile along the east bank of Pine Creek.

With a view to preserving one of Illinois’ last stands of native white pines and one of the southernmost stands of white pines in the United States, a movement was started in the early part of the 20th Century to set the area aside as a state park. Through efforts of Ogle County nature lovers, a bill appropriating $30,000 for purchase of land was passed by the legislature in 1903, but the measure was vetoed. In 1927, however, they had more success, and the forest was acquired.