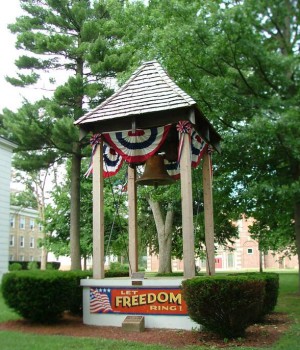 The year was 1963 and Clarence “Sandy” Sandstrom was the Chairman of the 4th of July Publicity Committee when he read about the bell ringing idea in the February 16, 1963 issue of “This Week Magazine”. The article, written by two Connecticut men, Eric Hatch and Eric Sloan, proposed a national simultaneous ringing of bells at 2:00 P.M. Eastern Daylight Savings Time on July 4th to remind Americans everywhere to pause and remember. The article stated that the bell ringing was a pre-civil war custom they wanted to revive.

Three days later on February 19, 1963 the Mt. Morris 4th of July Committee adopted the Sloan and Hatch idea. “The purpose was simply to remind you and me, all Americans, of our precious heritage of freedom”, Sandy said when he promoted the idea, a statement he would repeat many times as he promoted the bell ringing idea in the U.S. and world wide. He also suggested the annual Mt. Morris 4th of July Festival be renamed “Let Freedom Ring”, as Hatch and Sloan had written about.

The committee found a small bell, 16 inches in diameter, for $75.00. The local VFW Club donated the funds to purchase the little bell. The bell was mounted on a cedar post and placed behind the Veterans Memorial Fountain that was built in 1926 by the local American Legion Post with stones from around the U.S. and world. Each stone has an inscription from the donating organization or family. The Memorial and original Freedom Bell are located on the historic College Campus Village Square on Wesley Ave. in downtown Mt. Morris.

A dedication was planned for April 30, 1963, and Sandy, hearing that actor Ronald Reagan would be in nearby Dixon, Illinois, his hometown, arranged to have Reagan join the other dignitaries in the dedication ceremony. Reagan was among the first bell ringers, when he and other guests at the dedication were allowed to tug on the bell cord and ring the little Freedom Bell. Reagan borrowed an overcoat from Charles Finch on that cold April day. The famous coat is on display in the Mt. Morris Historical Museum.

In June, 1963, U. S. Senate Concurrent Resolution 25 passed in Congress. It reads as follows: “Whereas the tolling of the Liberty Bell of Independence Hall, Philadelphia at 2:00 O’clock in the afternoon of the fourth day of July, 1776, proclaimed the signing of the Declaration of Independence; and whereas the adoption of this historic document marked the birth of our country as a free and independent nation; and whereas it is fitting that the anniversary of this great event should be observed in each year at the same moment throughout the United States: now, therefore, be it resolved, that the Congress hereby (1) declares that the anniversary of the signing of the Declaration of Independence should be observed each year by the ringing of bells throughout the United States at the hour of 2 o’clock, eastern daylight time, in the afternoon of the fourth day of July, or at such other time in the afternoon as may be determined by local authority, and (2) calls upon civic and other leaders to take steps to encourage public participation in such observance.”

On July 4th, 1963, after much promoting by Sandy, 20 states participated by ringing bells 13 times at 2:00 P.M. E.D.S.T., in unison with the Liberty Bell of Independence Hall, Philadelphia and the Freedom Bell in Mt. Morris.

The next year, 1964, Sandy came up with the idea to send the sound of the little Freedom Bell over the loud speakers in the Illinois Pavilion at the New York Worldâ€™s Fair. Soon the little bell made bell ringing on July 4th a tradition, with more states and cities recognizing and participating in the event, all ringing 13 times in honor of the 13 colonies and 13 stars and stripes in Old Glory.

In 1965, William Wrigley, then owner of the Chicago Cubs, agreed to broadcast the sound of the little Freedom Bell over the sound system at Wrigley Field before the baseball game on July 4th. When Sandy went to Chicago to arrange the event, he was introduced to Jack Brickhouse, the voice of the Cubs on WGN television. Brickhouse arranged for the bell ringing to be heard over WGN, allowing millions of people to be involved.

In 1966, with the bell ringing firmly established, the Mt. Morris July 4th Let Freedom Ring Committee thought the Village should have a larger bell. The committee, after much searching, found a bell that was over 100 years old that had been on the bottom of Lake Geneva for 40 years after it broke through the ice when it was being moved across the lake to be placed in a new church that was being built to replace the church on the other side of the lake that had been destroyed by fire. The bell was raised by a home owner to be placed in his new home. After the bell was recovered the plans were changed. The Committee purchased the large bell from a farmer in Johnsburg, Illinois for $500.

The tower for the second bell was designed by Erick Mann, and the tower itself was erected by volunteers Marv Miller, “Babe” Tracy and Gene McGee. The yoke was made by Howard Fox, Sinnissippi Forest, from slippery elm, the same material from which the yoke of the Liberty Bell in Philadelphia is made, also of the same dimensions.

The large bell was sand blasted by E. D. Etnyre & Company, Oregon, IL to clean it. The bell stands on the Historic College Campus Town Square in downtown Mt. Morris on South Wesley Avenue. Eric Hatch and Eric Slone were invited to Mt. Morris on July 4th, 1966 to dedicate the new large bell.

Sandy was tireless in his efforts to promote the Mt. Morris Freedom Bell. In the fall of 1971 the large Freedom Bell was proclaimed the official Freedom Bell for the state of Illinois by an act of the Illinois legislature.

On July 4th, 1971, Governor Richard Ogilvie was the speaker for the bell ringing ceremony. He presented the Village a state flag and a bronze plaque for the Freedom Bell site. The plaque contained the following inscription:

“Let Freedom Ring on this occasion of the first official ringing of the Freedom Bell at Mt. Morris, let this message be heard by all Americans: Let us be one nation dedicated as never before to the realization of the promise of freedom for all”

Richard B. Ogilvie – Governor of Illinois

In 1976, special activities were planned for the Bicentennial Celebration. The Mt. Morris Freedom Bell rang on July 3rd to help commemorate the unveiling of the Statue of Liberty and the reÂlighting of the Statue of Liberty torch. President Reagan called for bells to ring nationwide when he re-lit the torch at 9:53 P.M. E.D.S.T. In a special proclamation designating July 3rd “Let Freedom Ring Day” he said: “What could be more fitting than to celebrate this moment with the joyful clamor of bells in every city, village and hamlet throughout our land, let every American take it as a summons to re-dedication to liberty.”

As the bell ringing idea grew in popularity, and bell ringing became a national event on July 4th, Sandy became well known as “Mr. Patriotic”. He received commendations and awards from several patriotic organizations, several presidents and every state legislature in the Union. He was a guest in the White House in 1984, and he was featured in the July 7th, 1986 issue of “People Magazine”.

The simple act of ringing bells has given added meaning to why we, as a nation, celebrate the fourth of July. Mt Morris and Sandy have played a leading role since 1963 in making the ringing of bells a truly national event to remind Americans of our Precious Heritage of Freedom. As Sandy said, “remember, if you will, that it all started at the Memorial Fountain in Mt. Morris, Illinois”.